On a Visit to Columbia, Mauritanian Minister of Health Shares His Vision of a Healthier Future for His Country More than 60 people gathered at the Columbia University Mailman School of Public Health on March 27, 2019, to hear from His Excellency Boubacar Kane, Minister of Health of Mauritania, about the challenges and opportunities facing his nation’s health system.

Notably, the minister discussed a national insurance plan that aims to provide universal health coverage for all Mauritanians. Under this plan, employees of official organizations would contribute nine percent of their salary, with employees of informal organizations paying $20 per month. This would allow the Ministry of Health to cover persons in need—an estimated one-third of the population—at no cost to them.

Minister Boubacar also discussed Mauritania’s maternal and child mortality rates, which are among the highest in the world, and his ministry’s plans for addressing this critical health issue. Specific strategies shared by Minister Boubacar included strengthening and enforcing reproductive health laws—for example, the minimum age for marriage—and improving care and making it more affordable for pregnant women.

“When you have insurance, it’s no problem, you can go and see your gynecologist one time, two times, or ten times,” Minister Boubacar said. “When you have no insurance, we give them the opportunity, so with 20 dollars [per month, paid toward insurance], you can follow until your delivery. This makes it so more and more women go to medical points. Now 70 percent of women are followed in the medical center.” Overall, Mauritania faces both communicable and non-communicable disease threats. HIV prevalence is fairly low in the general population, but the country has high burdens of hepatitis B, tuberculosis, and malaria. Mauritania has so far avoided the Ebola epidemics that have gripped countries to its south, but the country has faced other epidemics and problems of antimicrobial resistance. Among non-communicable diseases, cardiovascular disease is a rising concern, with 22 percent of the population over 15 years old experiencing hypertension. Lung disease, particularly from tobacco use, is another major challenge, along with diabetes, cancers, and kidney failure.

“We built a new cardiac unit that can treat all from prevention to open-heart cardiac surgery,” said Minister Boubacar. “For cancer, we are one of three countries where the treatment of cancer is free. Twenty percent of patients are covered by insurance, but 80 percent have their treatment for free. It’s the same for kidney failure. This helps us directly face these burdens and make patients safer.” During their visit, the delegation met with leadership from ICAP at Columbia University and the Mailman School of Public Health.

“It was an honor to welcome Minister Boubacar and his delegation to Columbia University,” said Jessica Justman, ICAP’s Senior Technical Director, who was involved in the meetings. “We enjoyed a productive discussion and I was extremely pleased that so many people were able to hear Minister Boubacar’s presentation on the state of health in Mauritania and his goals for making real, sustainable progress that will benefit the most vulnerable people in his country. There is much we can learn from each other and I am grateful for this opportunity for exchange and dialog.” 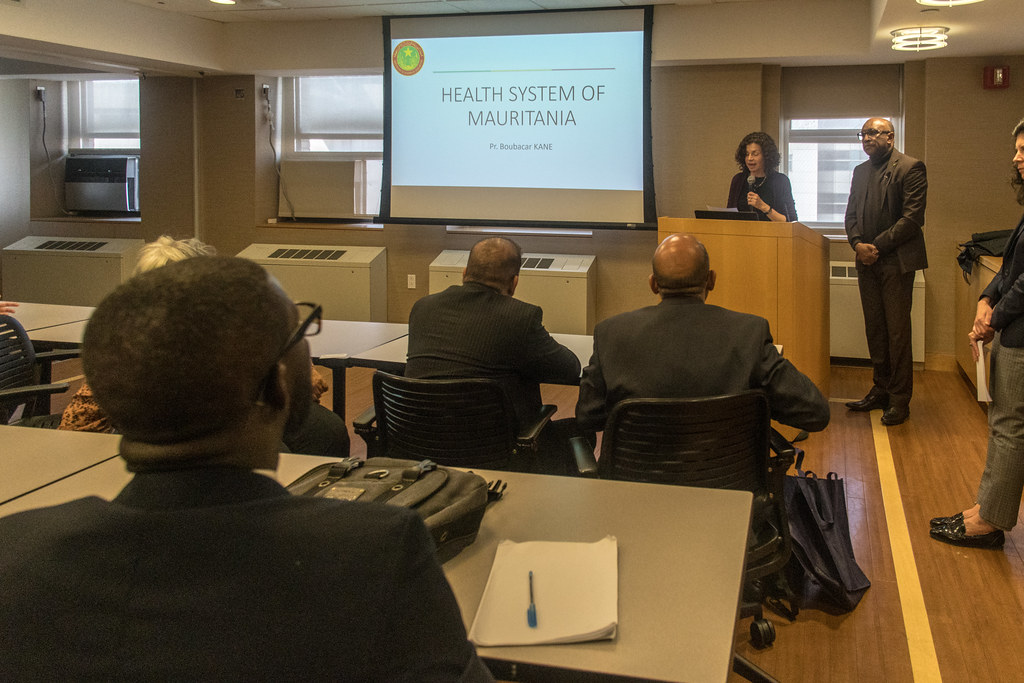