When it Comes to Keeping People Healthy, Condoms Have New York Covered Consider the humble condom: invented in antiquity, made with more resilient materials over time, and today available in numerous textures, a rainbow of color choices, and even different flavors. Despite its evolution, the condom still performs the same function it always has: to prevent the exchange of bodily fluids during sex and thereby reduce the transmission of disease.

With National Condom Week running from February 14-21, condoms are in the spotlight right now. As well they should be, since the condom continues to play a vital role in the reduction of sexually transmitted infections (STIs), including HIV.

At ICAP’s two New York City-based clinical research centers for HIV prevention, one in the South Bronx and one just down 125th Street from the Apollo Theater in Harlem, condoms remain a cornerstone of HIV and STI prevention efforts.

“Condom distribution is always a part of our outreach efforts and also part of our risk reduction counseling sessions with participants, due to the sharp increase in STI infections that has occurred in recent years and the difficulty in treating some drug resistant STIs,” explained Joshua Hinkson, laboratory manager at ICAP’s Harlem Prevention Center. Condoms aren’t the only item in the prevention toolkit, but they are inexpensive (or even free at the NYC Department of Health’s 3,500 distribution points, including ICAP’s HIV prevention centers), available without prescription, and they get the job done.

“Even though medical innovations have given us more tools to stop the spread of HIV, I tell people, ‘Condoms still work!’” said Kevin Mines, a community outreach assistant at the Bronx Prevention Center. “They help prevent transmission of HIV and other STIs. Simple as that.”

Many people living with HIV have learned that U=U—“undetectable equals untransmittable”—which means that if a person is successfully using medication to suppress the HIV in their blood, they cannot transmit the virus to others. People in the community are also aware that using pre-exposure prophylaxis (PrEP), keeps them safe.

“They know PrEP protects against HIV. But PrEP doesn’t guard against gonorrhea, chlamydia, or other STIs,” said Jawindy Swengbe, another community outreach assistant at ICAP’s Bronx Prevention Center. “That’s why they still need to use condoms. And that’s a message we work to get out to folks every day.” ICAP’s two HIV prevention research centers grew out of initial efforts headed by Wafaa El-Sadr, MD, MPH, MPA (who would later found ICAP in 2003) at the Harlem Hospital Division of Infectious Diseases, and Jessica Justman, MD (who would become ICAP’s senior technical director) at the Bronx-Lebanon Hospital Center Clinical Research Site. Located in the community, these sites conduct cutting-edge, NIH-funded HIV prevention clinical trials in two areas of the city that have been historically underserved and disproportionately impacted by the HIV epidemic.

Effective community outreach is key to the centers’ success, and condoms actually play a starring role in getting people’s attention, like at the Bronx Prevention Center’s recent “Hot Chocolate & Condoms” tabling event held right outside the center’s door.

Depending on which studies are recruiting participants, condoms might also get packaged in an outer wrapper calling out to a specific target audience and including information on how to check eligibility and enroll.

In addition to tabling outside and at street fairs to reach target populations, the centers also host events to welcome people into the office for social events. The Bronx center hosts focus group sessions three times a month where participants can bring a friend and enjoy refreshments while discussing topics such as condom negotiation, and on Valentine’s Day the center hosted its first-ever “Paint and Talk ‘Ish” (issues) event featuring sparkling juice and a painting activity to unlock lively conversation (see photos below and on Facebook). 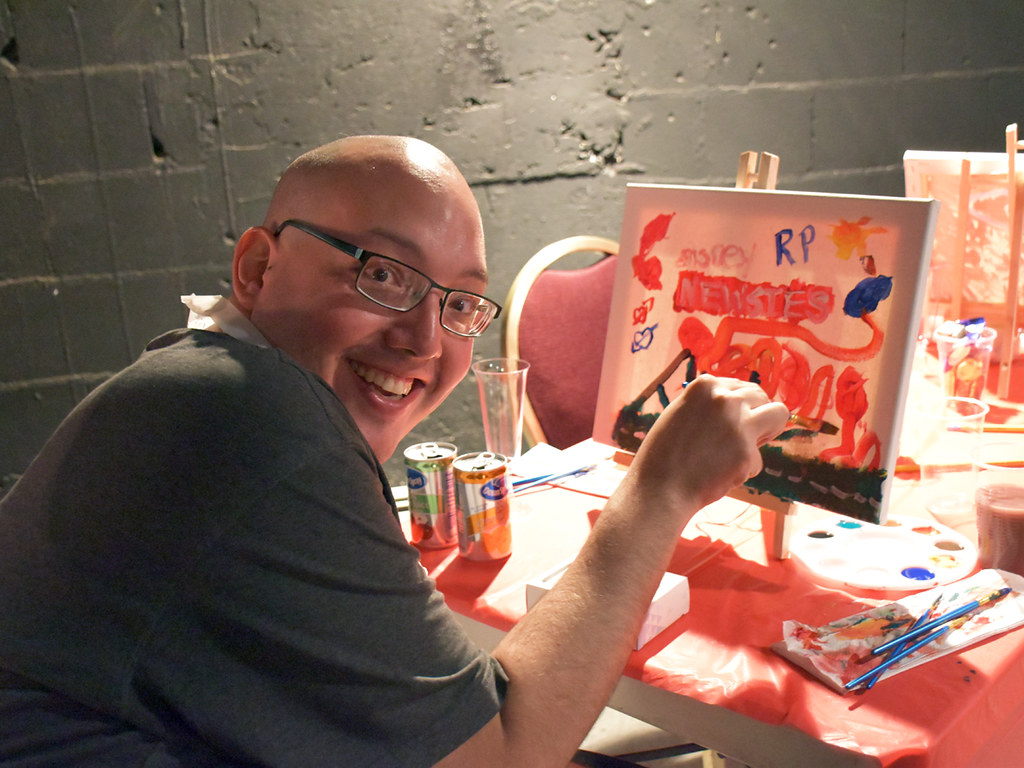 Strategies for successful condom negotiation are a frequent hot topic in group discussions, since this can be one of the biggest challenges. Even if a person knows the benefits of condoms and intends to use them, bringing it up in conversation, especially in a delicate moment, can be tough.

“Some people don’t know how to put condoms on properly—for example, pinching the top to leave room or rolling it all the way down the shaft,” said Mines. “And some are less apt to talk about it because of cultural barriers, but most people are open and willing to learn when given the opportunity.”

“Some people are really blunt, ‘You’re not having sex with me without a condom,’” said Swengbe, who counsels individuals on effective communication. “And some people may think this is too direct, but the phrase ‘no glove, no love’ is actually effective.”